The Acropolis of the Castle

The Acropolis of the Castle is located in the southwest corner of the walls, just after the main gate. The gate of Acropolis is further protected by a bulwark. The oldest phase of the Acropolis dates to the mid-Byzantine period, while significant modifications took place during the late Byzantine era and the Ottoman period.
Although today the Acropolis appears as a fortified stronghold, a few features, such as the many windows, indicate that the late Byzantine era included secular buildings, like possibly the ruler’s courtyard.

The Acropolis of the Castle (or Inner Citadel)

The Inner Acropolis of the Castle consists of a fortress complex and its gate is further protected by the main fortress wall. Its current form is the result of successive interventions, from the Byzantine and Ottoman periods, and occupies an area of 1,865sqm.; It’s the Acropolis of the Castle (kastraki or Ιts Kale), the “goulas” (the word in our sources that denotes ‘γουλάς’ is tower-fortress) of medieval sources. The great height of the walls 11m. and the robustness of their construction made the inner of the Acropolis an extremely fortified bastion in case of siege. Inside the Acropolis three buildings are preserved, which have undergone several modifications, probably their first construction phase can be dated to the Byzantine period. A large one on the north side, which over the entrance walled on its facade a marble slab with the depiction of a lion. Perhaps it was a marble closure of a Byzantine iconostasis from a church that existed inside the Castle. A small basement on the east side possibly was operated as a prison and it is considered that General Makriyannis (1797-1864) was imprisoned there in 1821. Another small one opposite the gate, near which there is a Coat of Arms engraved on a well.

The inner citadel of the Castle of Arta consists of the tower-fortress of medieval sources [goulas]. The general plan of the citadel shows asymmetry, which is due to the morphology of the soil and probably to the various phases of intervention. The fortification character of the inner citadel is the result of interventions imposed by the continuous use of the space and the evolution of the siege art and the possibilities of firearms. Therefore, it is not certain that the expediency of this area was from the beginning that was formed in the last phase and is evident today. It is possible that older building phases belonged to architectural ensembles that did not have a pure fortress or defensive character.

Exterior of the Acropolis

The outer sides of the fortifications of the inner citadel are identified with the fortifications of the Castle. Specifically, it concerns the southwest corner of the walls of the Castle, from Tower Π19, west of the main gate, to Tower Π16 on the west side of the walls of the Castle. In this part of the fortifications stands out the large polygonal bastion of the late Ottoman period. It is characterized by elaborate masonry and presents typical elements of the fortification art of the early 19th century, sloping masonry and stone decorative tape at the height of the ramparts. Its interior may include a pre-existing tower of byzantine origin. In its superstructure, a spacious cobblestone plateau is formed to support five large cannons and their accessories and the comfortable movement of their pilots. Two similar cannons have been formed in the inter-tower space up to the triangular Byzantine Tower Π18. The inter-tower space between Towers Π18 and Π19 is a construction of the Byzantine period, has three arched windows and returns with rectangular ramparts. Byzantine is also the rectangular Tower Π19, which protected the central Gate from the west. The southwestern corner of the Castle at a lower level was protected by a wall of about 5.30 m., in the southern part of which rifles were formed during the Ottoman period. The rampart started from Tower Π16, continued to the east, covering the central Gate, while today it reaches only up to Tower Π19.

The entrance to the inner citadel is made by an arched gate (1.9×1.6m.) located immediately to the left of the Central Gate of the Castle. The gate is topped with an arch of the stone vault and its masonry on both sides consists of a large brick structures layout, probably coming from an ancient building. Above the gate, there is an arch made of alternating stones and bricks, which is surrounded by a simple brick strip. The gate opens into a wall that was later added and was the outer fortification line of protection of the gate of the inner citadel. This wall, which we call the rampart, blocks the southeastern front of the inner citadel wall. The wall is 4-4.5m high. and 1.5m wide. forms internally a narrow corridor that leads to its western end at the entrance of the inner citadel. It extends to a length of 25m. about to the southeast corner of the Byzantine Tower Π20 which protects the entrance of the inner citadel. On its inner side, it has a perimeter for the movement of the defenders, while on its outer side the joints can be seen from the now walled ramparts that existed on the upper level. In particular, there are two phases of raising the rectangular ramparts and one more, when the loopholes were walled and the current straight crown was formed. In addition, vertical narrow openings (arches or rifles) are preserved in the distinguished ramparts. Similar openings, but much larger, are preserved at the height of the runway, resulting in a complex defense system that allowed shots at high density and range.

The entrance to the Acropolis

The entrance to the inner citadel is made by a low, almost square gate measuring 1.8 m. (height) x2m. (width). This gate is formed by two parts of a monolithic column on either side on which a large marble lintel rests, probably in second use. The gate is protected by the machicolation, through which the defenders fired against the attackers. The machicolation rests on three stone rectangular cantilevers and has the form of a closed balcony. The entrance leads to the lower level of the inner citadel. To the north is a vaulted building that occupies the entire northwest side, to the west a small building of the Ottoman period and to the south extend building debris and accesses leading to the perimeters of the walls and the large bastion of the southwest corner of the Castle.

The Buildings of the Acropolis

In the inner citadel, there are today three buildings, a small basement, the remains of a large building, and a building with a trapezoidal shape.
The small basement on the east side, possibly was operated as a prison and it is speculated that General Makriyannis (1797-1864) was imprisoned there in the year 1821.
The contribution of Ioannis Makriyannis in the Greek War of Independence was appreciated by the Greek people, as also by the citizens of Arta. So, after his death, a bust was erected in his memory, outside the Castle of Arta; A cultural association was also founded, which bears the name Makriyannis.

The second building is located just opposite the entrance of the Acropolis and dates back to the Ottoman period. It has an almost square floor plan (5 x 6.3 m.) height of 5.5 m., and is covered with a double tiled roof, however inside it is vaulted. On the east side, it has an arched entrance, above which there is a built-in marble slab with a relief decorative theme. Between the entrance and the marble slab open two parallel narrow windows, which look like crenellations.

On the north side of the citadel, there is a building of large dimensions and of trapezoidal plan (14.5 / 13×19 / 13) which occupies the entire northern corner of the fortification. It has a height of 9.35 m, is covered with a double tiled roof and the south side is covered in a large area and has many repairs. Inside the building is three-part and vaulted. Two rows of pillars on the north-south axis define the spaces. The entrance to the building is made by an arched entrance in the middle of the south face, above which is a built-in marble relief slab of the Byzantine period depicting a walking lion in a double, square, and circular, buttoned frame. The building in its current form dates back to the Ottoman period, however, its morphological characteristics, the existence of bricks in the facade, the plan, and its inclusion in the structure of the citadel, support the hypothesis that some older phase dates back to the Byzantine period.

On the south side, they are preserved at a height of 2m. and length of 12.6m remains of a large building of the Byzantine period. The building has an elaborate construction of large worked stones in regular layers, reinforced with bonding mortar, while in between single and double rows of bricks can be distinguished and large sections of brick-enclosed masonry are preserved. On the north side, there is a large entrance with a careful configuration, from which a step is maintained. The northern masonry seems to have covered the entire width of the inner citadel, as relics are preserved in contact with the western outer wall. In the inner (southern) masonry of the building, there is a brick piece of jewelry that forms a zigzag line. The impression given by the building is that of a formal and solid (wall width 1m.) Building with decorated facades and general monumental character. Based on the surviving remains, it seems that it was developed on the east-west axis, but this hypothesis will have to be substantiated by excavations (in the future). 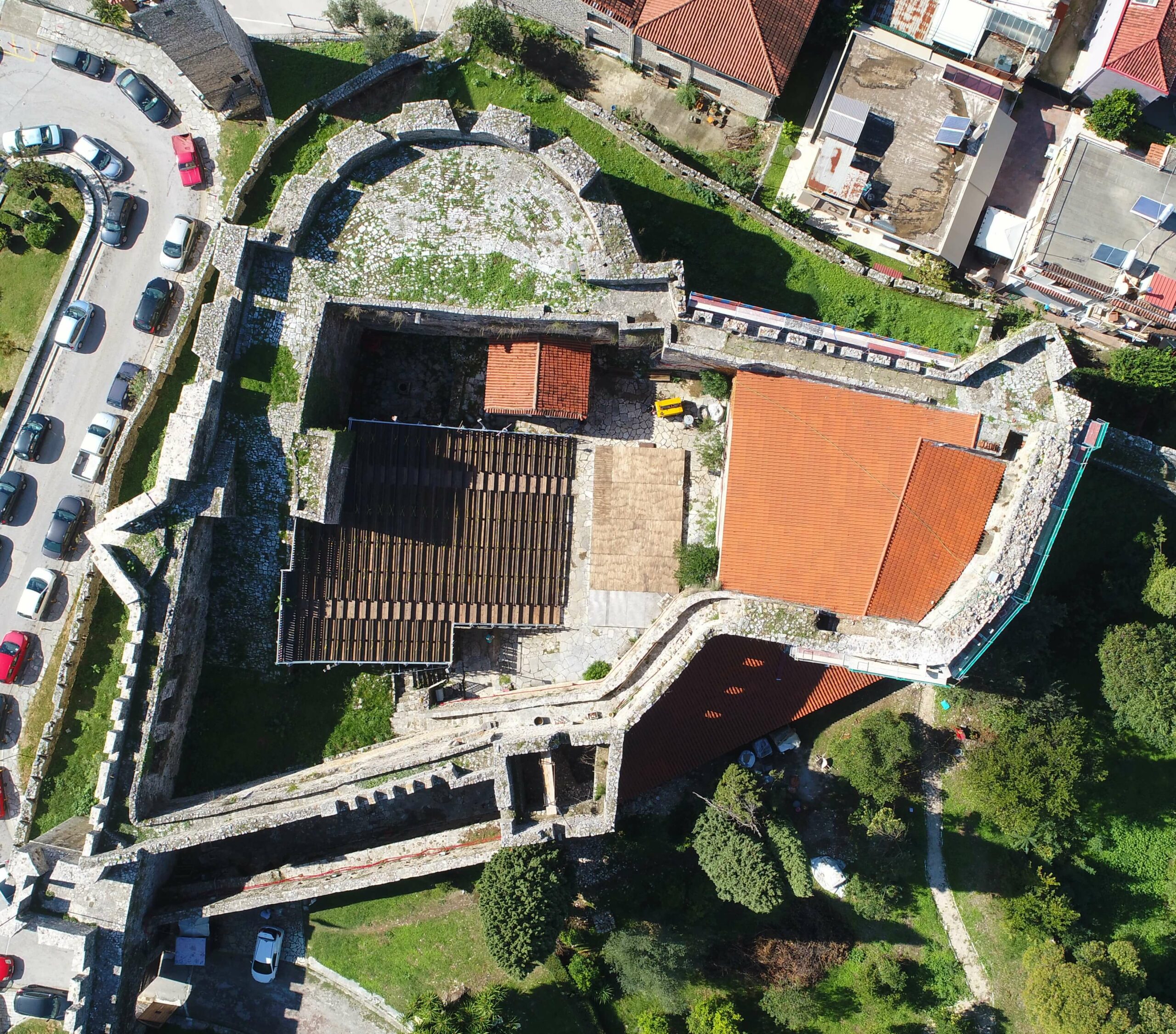 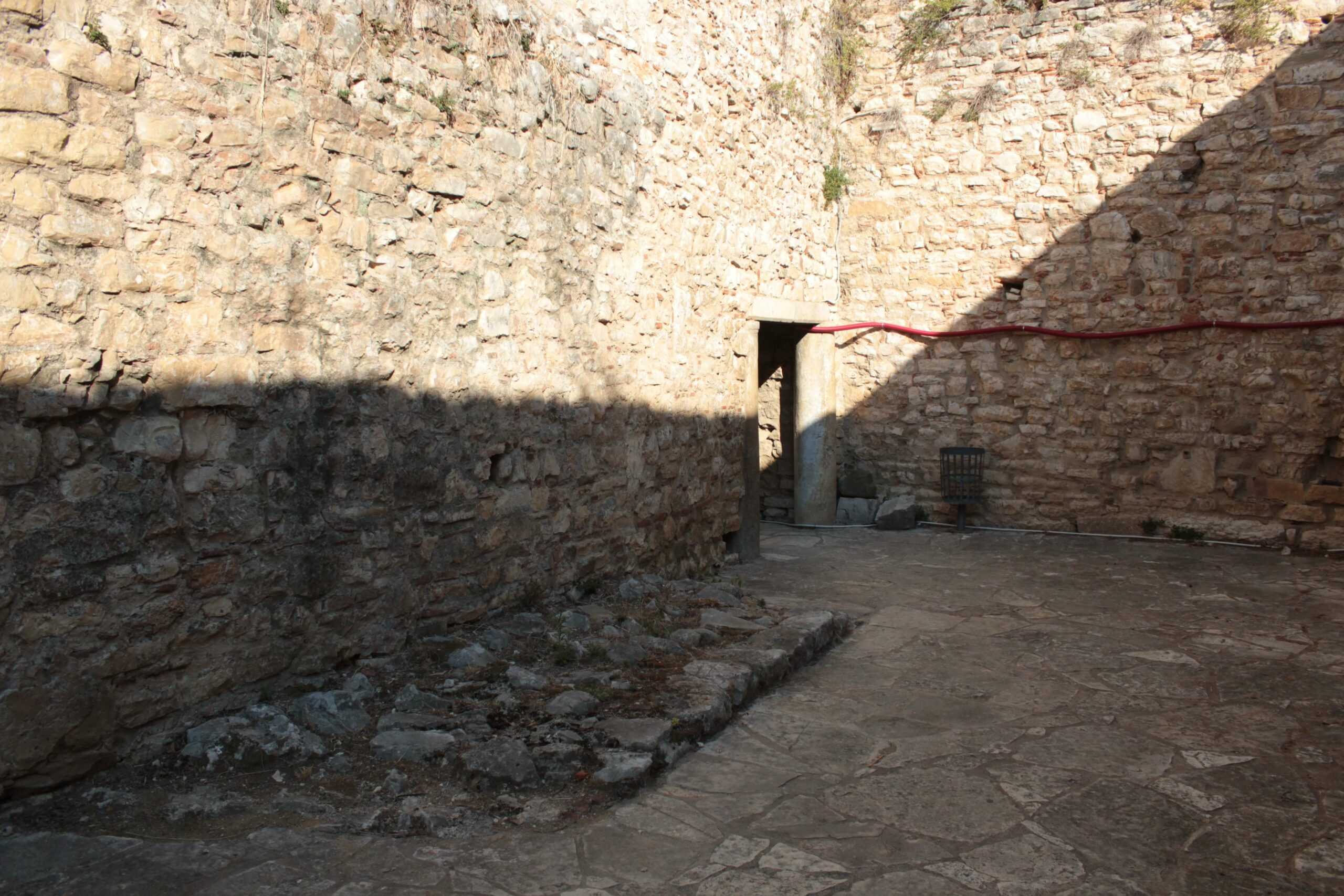 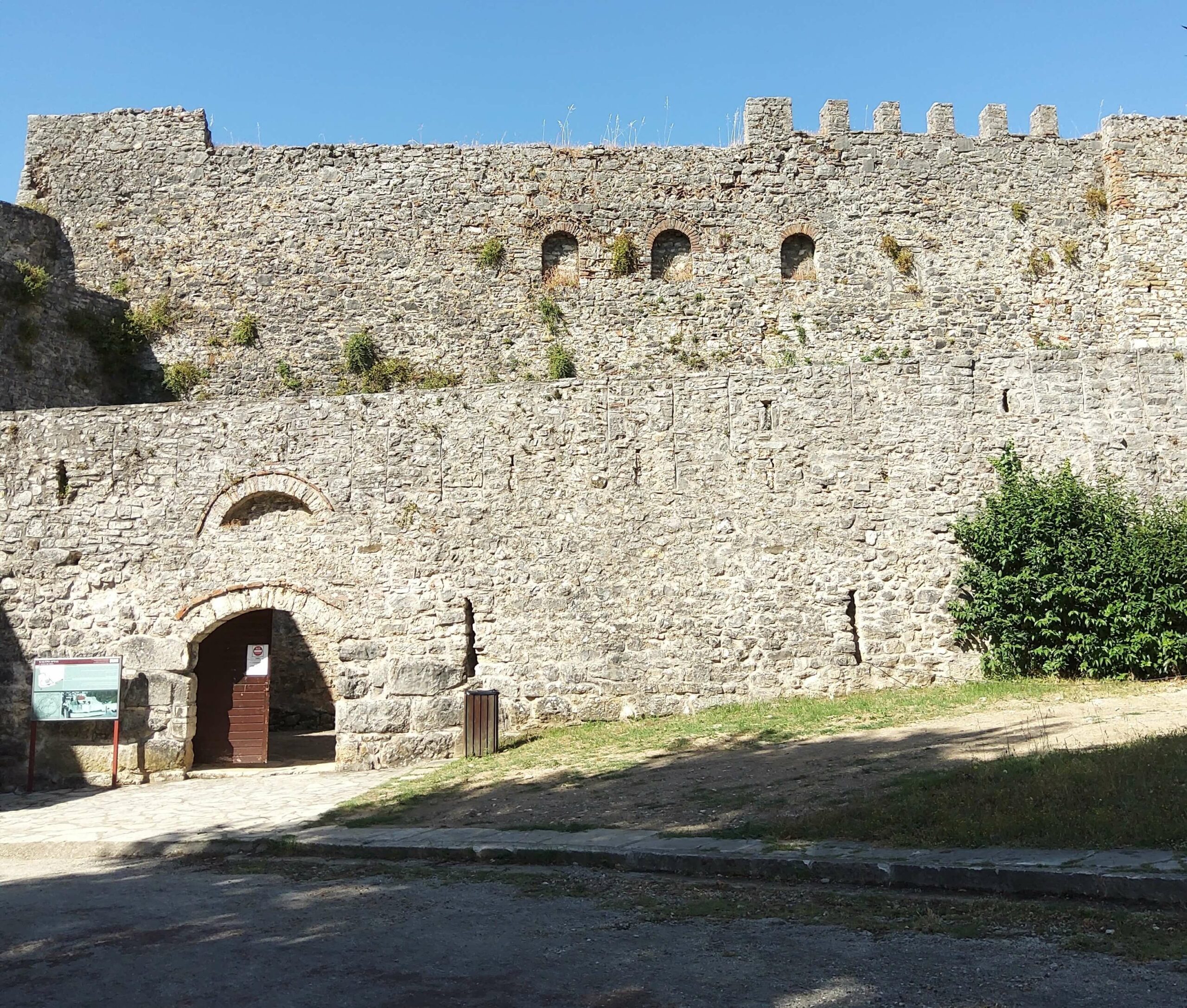 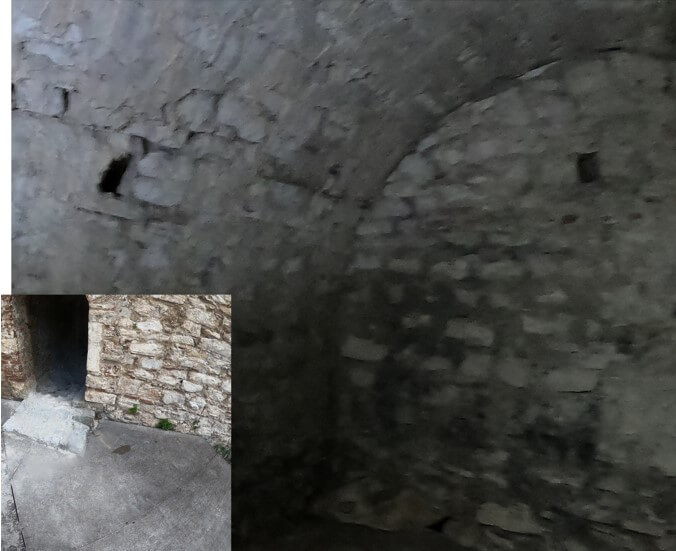 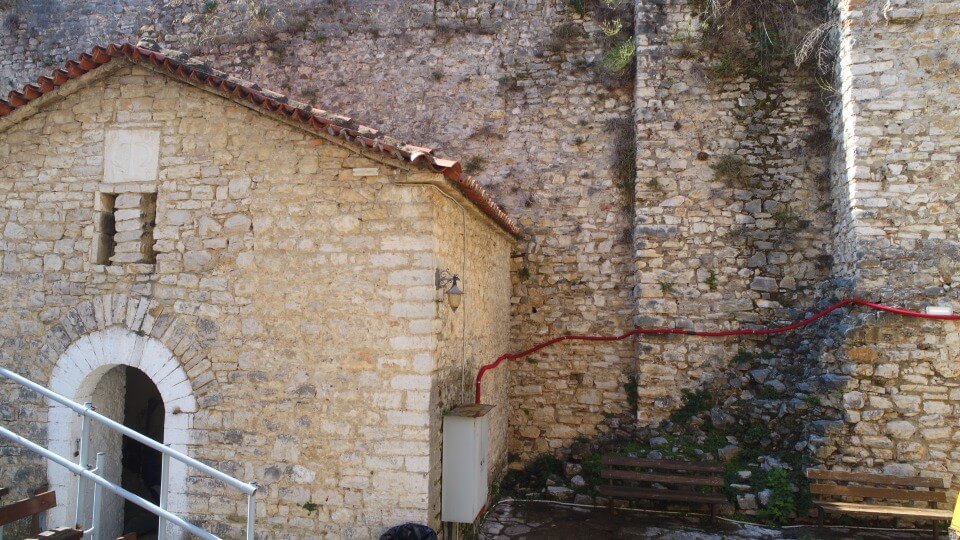 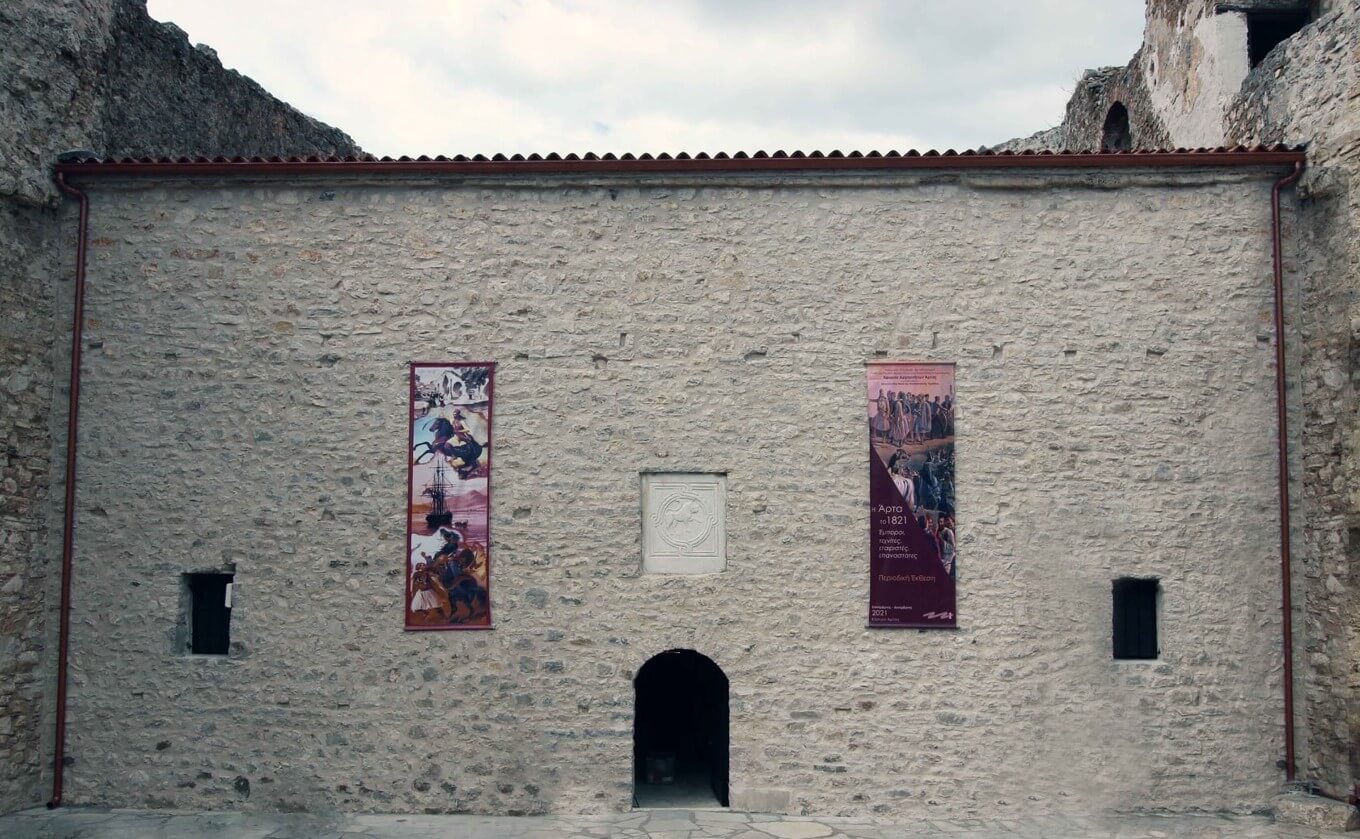